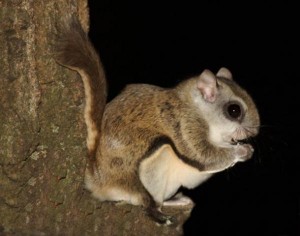 A few years ago, our father, Tony, had some unwanted nighttime visitors to the cottage. At first he thought they were mice, but they avoided cheese and peanut butter laced traps like the plague. Finally, he managed to catch a glimpse of one and to his surprise, it was a flying squirrel, or more correctly, a bunch of them. They are approximately six inches long, with very velvety fur and a layer of skin that can be stretched between their rear and front legs to allow them to glide long distances. The most striking feature is the large oversized eyes, like something from a science fiction movie creature that they need since they are nocturnal. Each evening they would enter the cottage attic. Perhaps to forage on wasp nests, or perhaps as an adventure, who knows, but one thing is for certain, a bunch of flying squirrels are noisy. Of course the obvious solution was to seal the holes where they were entering. Seal we did. Every hole we could find, yet still noises were in the attic at night. One more search turned up a very small one and one half inch hole at the very top of the roof. The only indication it was the hole being used was the smooth wood which was worn from the squirrels squeezing in and out. The hole was sealed and the problem was over, we thought. We unfortunately were only partly right. That night when darkness fell, the racket started, however, this time the noise was also in the upstairs bedroom. Before our Dad could go upstairs, down the walls came the squirrels into the living room and kitchen, about a dozen of them. It looked like something out of the movies with squirrels running about. He opened both the back and front doors, and with the broom he eventually shooed them all outside, or at least he thought he did. The next night he was at the kitchen table with a visitor, when he noticed the visitor staring towards the stairway directly in front of him. There in the middle of the stairs was one lone flying squirrel, apparently left behind from the night before, sitting on one step and staring right back at the visitor without moving. Of course the visitor, who had never seen a flying squirrel before, was not only taken by surprise by the squirrel, but also by its behavior, just sitting there staring back. He looked over to Dad as for help as what to do. Dad told him what it was and to sit still, and assured him it wouldn’t hurt him and, and like he had done the night before, he opened the front door. Without any prodding the squirrel hopped down the remaining steps and out the front door into the dark night. That is the last we have seen of the flying squirrels in the house, but the story of their visit and the visitor’s encounter with the lone flying squirrel remains.